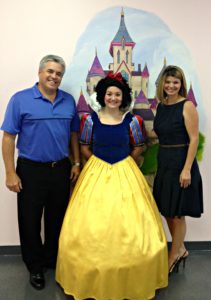 CommunityWorks is enchanted by this week’s Women’s Small Business Highlight, Once Upon a Dream Parties. When April Curtis of Greenville took her oldest daughter to Disney World, she was struck by her little girl’s sense of wonder as she interacted with her favorite princesses in the park, and the germ of an idea for a business sprouted. What if she could bring that sense of magic to little girls without them having to make a trip to a big theme park?
That was in 2009, and she worked on the concept, the costumes, and a web site for Once Upon a Dream Princess Parties for a couple of years before she had her first party in April of 2011. Starting out, Curtis played the part of the princess at all of the parties, but as her business—and her family—grew, she began hiring and training other young women not just to wear a costume but to really be a princess for a group of little girls.
Through word of mouth and people Googling “princess party,” what started as a small venture that she could do to earn some income while her kids were small grew to the point where she was doing 30–45 parties a month.
“A lot of moms started saying to me that they would love to go somewhere else to have a party like this—not have to deal with the mayhem and the clean-up,” Curtis says, “so opening a store made sense as a next step.”
It wasn’t only about moms not wanting to clean up after 15 princesses, though—it made sense for the business because it meant being able to book more parties. “Not having to set up and take down and transport everything makes it easier for us, and we can free up that time,” she says.
But the cost of opening a storefront meant getting a loan and venturing into a whole new area of business ownership that she was not familiar with. Curtis says she had worked with the Greenville Small Business Development Center, and someone there pointed her to CommunityWorks to help her with the next steps.
CommunityWorks small business loan officer, Archie Johnson, guided Curtis through the loan process to help her secure the financing she needed—but, she says, he was helpful in other ways, too. “Archie was so helpful, very attentive. He helped me work through angles that I wasn’t familiar with,” down to details like the layout of the store and getting quotes on services.
Once Upon a Party is located at 1099 East Butler Road provides a space for magical princess parties and a store that serves as a “one stop shop for all your princess needs,” according to the Facebook page. There is a wide range of party packages (and at-home parties are still an option). Parties are generally geared towards children aged three to eight, although they have done a few first and second birthday parties and an occasional 9- or 10-year-old party. Princess Parties are fun for boys, too. Just let the staff know if your party is co-ed and they’ll provide dress-up, arts and crafts, and goodie bags geared toward a co-ed crowd.